What is the meaning of the most incomprehensible painting of the 16th century?

Hieronymus Bosch was an interesting and unpredictable personality. Therefore, it is not surprising that his painting is entirely encrypted symbolism. Some claimed that he was a zealous Catholic, others guessed in him an “Adamite” (medieval nudists) or a representative of the Cathar sect, who were fond of symbolism.

It is known that the artist belonged to the Pious Brotherhood of Our Lady. BBB – urban activists of that time, parishioners of the Cathedral of St. John. The Lutherans gave the world the Age of Spiritual Awakening, the Cathars introduced a heresy that the church has been trying to eradicate in Europe for centuries. Perhaps the “Garden …” Bosch was just a parody of the “leftist” doctrine, distorting the canonical plots. 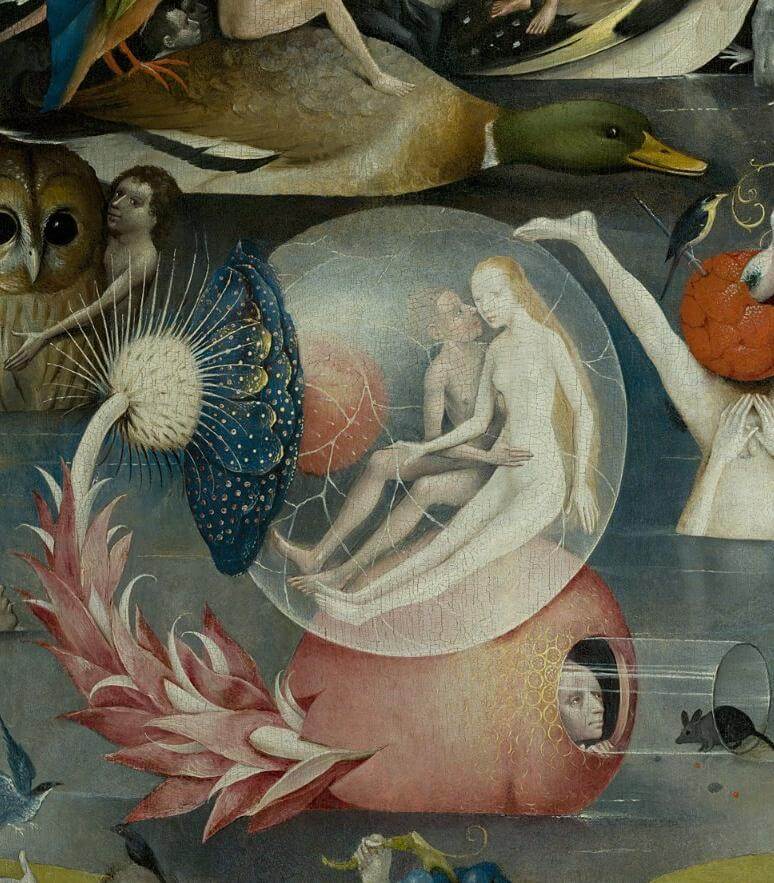 Everything is mixed up in Bosch’s Garden of Earthly Delights – deities and demons, saints and sinners, notes and books, musical instruments and instruments of torture, animals and birds. Perhaps the encrypted messages should be read by the name of the first letters of the creatures. But many monsters and creatures of unknown origin do not have a name. Therefore, his “Garden …” is the most famous and incomprehensible work of the brilliant Fleming.

Jeroen van Aken is from the Netherlands himself. “Hieronymus Bosch” is an autograph in all his paintings (in tune with irony). In 1517, the first mention of this work of art was noted (a description of the property of the Nassau family in Brussels). The triptych, along with other masterpieces, entered the Madrid collection of the Spanish King Philip II in 1936, when the civil war broke out. The medieval masterpiece was written in 1500-1510, the original is kept in Madrid, in the Prado Museum.

The manner of painting is surprising with the expressive drawing of the figures of people and animals, the distribution of light and the absence of shadows. Someone tried to reproduce the sound of notes, but this did not give clues to Bosch’s message.

Bosch’s “Garden of Earthly Delights” became a triptych in the 20th century. Prior to that, he was called Luxuria for the sin of voluptuousness. There were other versions associated with heavenly pleasure and hellish torment. It is clear that through love for sinful pleasures, the “garden” turns into a “hell” from which no one can get out. As they say, an “oil painting”, closed with a book, on wooden planks 220×389 cm.

The symbolism of each part of the triptych

The left wing of the triptych is the most “understandable”; it depicts Eden or Earthly Paradise before the fall. The first people, who did not know the rejection of God because of sin, had not yet embarked on the path of mortal flesh. Paradise had a perfect order of things without chaos and decay. But it is surprising that along with the image of Jesus, Adam and Eve, to whom God gives instruction, there are alchemical and esoteric allegories.

The central part of the triptych “The Garden of Earthly Delights” most likely shows the cycle of life where people end up after the fall with the taste of a destructive fruit. Demonic beings and the temptations they offer involve humanity in all sorts of harmful lusts, moving away from God. They bring you closer to an eternal stay in hell with no chance of salvation. People, refusing everything sublime-spiritual, with all their passion give themselves to carnal things – satiety with sinful pleasures.

It is quite logical that the right wing is hell, the place where all sinners go who have not accepted the atoning sacrifice of Christ. No one can break the yoke of sin by his own strength. Apparently, this is what God warned the first created people from the central sketch on the left wing of Bosch’s Triptych “The Garden of Earthly Delights”.

This part of the ingenious creation reflects demonic creatures and instruments of hellish torture. Most likely, these are the symbols and ideas of Catholics about hellish torments generated by the fantasy of Hieronymus Bosch. There are things that are difficult for an adequate person to come up with. These monsters are something from a series of nightmares that struck the imagination of a brilliant Renaissance artist.

Symbolism of a medieval masterpiece

Having a general understanding of the concept of the modular painting “Garden of Earthly Delights”, it is difficult to say with certainty what it all means. Nudes, incomprehensible fountains, unfinished buildings and monsters without a name. What’s this? Nightmares and hallucinations of a medieval genius? Caricatures of the teachings of the Cathars and esotericists or your own experiences from thinking about the meaning and path of creation? Let’s try to figure it out at the suggestion of authoritative experts, interpreters and connoisseurs.

Christ is the central figure of the first image. The Cathars rightly considered him the Savior and the antagonist of the devil, who came to the Garden of Eden to tempt and sow the seed of distrust in God. In the left wing of Bosch’s triptych The Garden of Earthly Delights, He presents Eve to Adam, having created him as a helper and wife.

The first people are Adam and Eve. Probably, the Creator of the Universe gives them instructions, warning about the consequences of falling away from God. Judging by the text of “Genesis” in the Bible, He gives the commission to “be fruitful and multiply, filling the earth.” They still do not know what “good” and “evil” are, since Satan, in the form of an ancient serpent, did not come to sow unbelief, asking Eve whether God said?

Cathars considered women vicious from the beginning, justifying male lust. Adam’s nature in all its “glory” is revealed in the central part of Bosch’s triptych. After the “presentation” of the forbidden fruit, the ancient serpent left. Eve wanted to taste the fruit of the tree of the knowledge of good and evil, later sharing it with Adam. After that, Adam accused God and Eve of temptation, instead of repentance, having lost relationship with God.

The owl is the symbol of the prince of darkness in Bosch’s painting The Garden of Earthly Delights. The night predator is watching what is happening, initially plunging human nature into evil. This bird as an observer is present in many plot compositions filled with symbolism.

Cat and mouse is an endless game with souls that sooner or later get caught by predators. The “gluttony” of fallen nature is one of the manifestations of the flesh. One of the plot accents is the “inconsistency” with the description of Paradise, where the lion dine, instead of peacefully reclining with the lamb (young sheep).

Fountains are an esoteric symbol. An unusual parody of the living water source of Eden. Water is a symbol of life, which is used in church practice (baptism, washing). Cathars rejected many rituals. Bosch has a sphere in the fountain as a created world, from where an owl peeps out, having done a lot of evil. Art critics see this as a second subtext – cancer (chitinous pink fountain) and the owl in it (Saturn) reflect an astrological indication of the time of the coming Judgment Day. 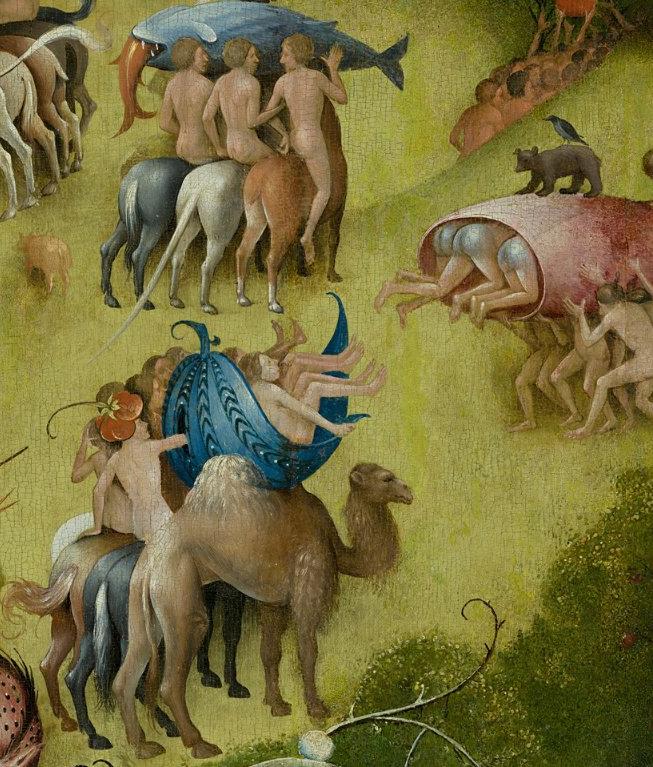 Nude figures with amorous amusements are a reflection of shamelessness. Joy in the bosom of nature is a symbolic reference to the plot of the Garden of Love, popular in the Middle Ages. At first glance, it may seem that this is the “childhood of mankind”, but upon closer examination, it is clear that everything is stricken with moral decay.

Musical instruments are a symbol of one of the ways of carnal pleasure, “the language of the soul and body.” During the Renaissance, music received a new round of development, dividing into “church” and “secular”. She devoured the figures depicted in the Garden of Earthly Delights by Hieronymus Bosch.

Pearl. The biblical expression “do not throw pearls before swine” comes to mind. Pearls are precious truths given by Christ but rejected by fallen humanity. According to the Cathars, the spherical pearl symbolizes the purity of the soul, the luminiferous core – all that is left of people from creation. Bosch’s pearls are scattered in the dirt.

Strawberries and other berries. According to researchers of Renaissance symbolism, berries were an identification of alluring sin and illusory pleasures. In the garden of sinful pleasures, there are many different fruits.

The cycle of riders moving counterclockwise is the personification of reincarnations, according to esotericists. However, there is no confirmation in the Bible – each soul, at the end of its bodily life, will give an account to God. Perhaps the round dance symbolizes the circle of passions from which it is impossible to escape. Movement in the opposite direction is another irony of Hieronymus Bosch over medieval astrology and the zodiac circle.

Birds. In Bosch’s time, waterfowl were considered “low creatures” who liked to dip in dirty water. The swan is a symbol of purity, revered by the Pious Brotherhood of Our Lady, where the brilliant artist was. Black migratory birds are a symbol of the rebirth of evil, and a hollow egg is the emptiness of the soul.

Death tree. A mixed image, consisting of heterogeneous objects, reflecting the mortal shell of the earthly life of the soul, emptiness and unbelief. The monster plant in the Garden of Earthly Delights triptych personifies the pernicious essence of the material world.

A transparent sphere with lovers is a symbol of the fragility of relationships built on lust. In those days, the saying was popular: “Glass and love, how short-lived they are!” Having fenced off with glass, sinners feel protected, but their joys are obvious to everyone.

The fish is less common than other symbolism. In the time of the first Christians, it was the image of the Apostles or “catchers of souls”, whom they turned away from sin. In Bosch, the fish carries a double meaning. Dead fish is “rotten meat”, symbolizing internal corruption, the food of scavengers. This is a sign of the zodiac and just a symbol of easy prey.