Depicted as a snake or dragon devouring its own tail.

My end is my beginning. It symbolizes the absence of differentiation, the totality of everything, the original unity, self-sufficiency. It generates itself. himself, unites with himself in marriage, fertilizes himself, and kills himself. It symbolizes the cycle of loss and restoration of integrity, the power that spends and renews itself forever, the eternal cycle, the cycle of time, infinity in space, truth and knowledge in one person, the union of two ancestors, androgyne, primordial waters, darkness that preceded creation, isolation the universe in the chaos of waters before the arrival of light, the potential before its actualization. Images of ouroboros on tombstones symbolize immortality, eternity and wisdom. In many myths, he embraces the whole world and is identified with the circular flow of waters surrounding the earth. 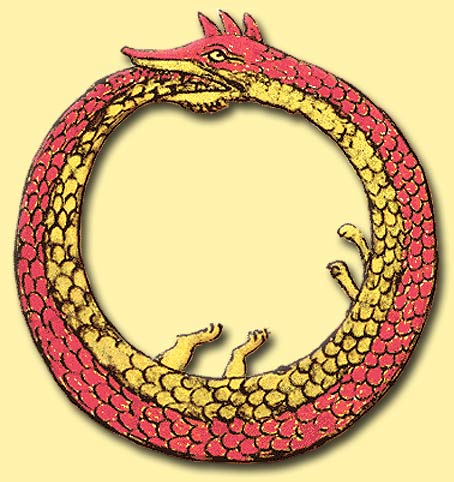 He can maintain the world and its existence, and at the same time, he brings death into life and life into death. Immovable externally, he personifies perpetual motion, always returning to himself. In Orphic cosmology, he embraces the Cosmic Egg. He is also called Hercules, which identifies him with the revolution of the Sun. Macrobius also connects this symbol with the movement of the Sun. Together with the ouroboros, Alpha and Omega are often depicted. Alchemy: the unredeemed force of nature, the hidden force, unformed matter, the opus circulare of chemical substances in a sealed vessel.

Buddhism: the wheel of samsara.

Egypt: the circle of the universe, the path of the sun god. Greece: All is one. Initially, the Whole was like an egg with a snake (pneuma) surrounding it like a tight bandage or ring (Epicurus). In the symbolism of the Orphics, it is identified with the Cosmic Egg and the eon – the time of the existence of the universe. Hinduism: the wheel of samsara. As a symbol of latent energy, ouroboros has the same meaning as kundalini. Sumero-Semitic Tradition: All-One.

At all times, representatives of the human race dreamed of not only living forever, but also having a stable well-being and excellent health. In part, this was achieved by some representatives of various classes. Until we learn to live forever. But the ancestral branches of rich families can be traced back to the ancient times of the existence of human civilization. The main criterion for such prerequisites is the presence of jewelry made of precious metals. The use of various kinds of amulets, pendants and amulets.

The symbol of ouroboros can be interpreted in different interpretations. From ancient Greek, it is a snake or dragon curled up in a ring, biting its own tail. The most common meaning of the symbol is the infinity of life. Constant rebirth at the best moments of the life cycle. The eternal alternation of the moments of birth, life, death, the destructive processes of nature and the time of rebirth.

Reincarnation. The infinity of life.

Due to its significance, the ouroboros was often used by alchemists, religious cults, masters of various degrees. Its meaning was directly attributed to the forces of the cosmos. The origin of the symbol has not yet been established. Many researchers believe that this is a legacy from some advanced civilization. Exactly the kind that existed on earth. And also outside. 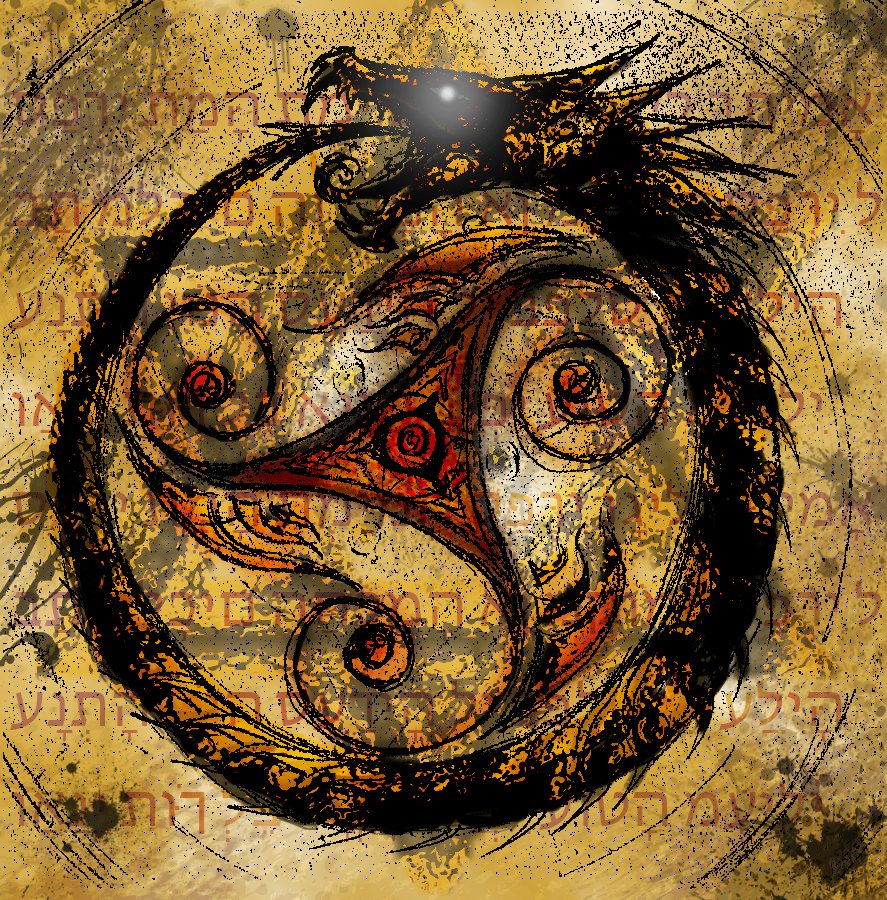 This sign was constantly used in their rituals by representatives of different civilizations of mankind. The Aztecs, ancient Greece, Israel, Egypt, China used the symbol of the snake from the first time of their existence. In alchemy, ouroboros is considered one of the main elements for obtaining the “philosopher’s stone”. For reference, the philosopher’s stone, a kind of elixir that turns liquid into gold.

Gift of the Ancients

Jewelry, made in the form of a ring with the sign of ouroboros, was considered a strong amulet that brings health and good luck since ancient times. It is believed that the first ouroboros ring was used in ancient Egypt. The symbols of a coiled snake were used in the temple of Osiris, applied to protect against evil spirits on the homes of ordinary residents.

Rings, pendants in the form of the sign of the ouroboros were worn as a talisman or as a kind of pass to eternal life. It should be noted that all jewelry is made only of precious metals – gold, silver, bronze, etc. Products can be supplemented with inserts containing precious stones. By purchasing an ornament in the form of an ouroboros sign, you can actually be convinced of its magical properties and understand that the ancients, not in vain, constantly used the symbol for their noble purposes.